Since 2010, PCG’s Technology Consulting practice has partnered with the State of California to procure and implement one of the largest public sector enterprise resource planning (ERP) projects in the nation - the Financial Information System for the State of California (FI$Cal). PCG has provided assistance with procurement, served in a technical advisory role, and currently provides independent verification and validation (IV&V) services.

FI$Cal is one of the largest and most dynamic information technology undertakings in the history of California, an ERP project that will consolidate all the state’s accounting, budgeting, cash management, and procurement operations into a single financial management system, powered by the PeopleSoft Financials and Supply Chain Management (FSCM) system and the PeopleSoft Interaction Hub. The system will eliminate the need for over 2,500 department-specific applications. Aside from a small number of departments that have been deferred or exempted from the project from the beginning of the project, all California State Departments will manage their finances through the FI$Cal system.

When the project team has completely implemented the system, more than 160 state entities and 15,000 end users will use it to conduct the financial business of California. Currently, more than 97,000 vendors doing business with the state use the FI$Cal system.

How is PCG involved in the FI$Cal project? 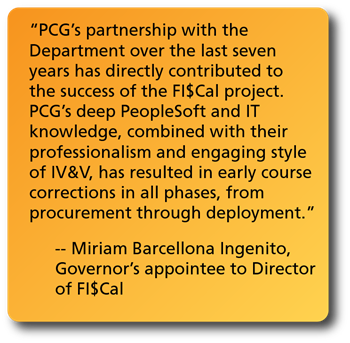 The PCG team has helped guide the project toward successful implementation by providing IV&V – ongoing, independent third-party assessment of project progress resulting in forward-looking risks, issues, and obstacles facing the project, with suggested mitigations for each possible impediment. PCG has worked with the project team to ensure that the FI$Cal project is following applicable industry standards as identified by various standards organizations, as well as adhering to contractual obligations. The PCG team also assesses design, configuration, and management plans created by Accenture and the state to assure fitness for purpose and applicability to the objectives of the project.

“PCG’s partnership with the Department over the last seven years has directly contributed to the success of the FI$Cal project,” said Miriam Barcellona Ingenito, Governor’s appointee to Director of FI$Cal. “PCG’s deep PeopleSoft and IT knowledge, combined with their professionalism and engaging style of IV&V, has resulted in early course corrections in all phases, from procurement through deployment.”

The PCG IV&V manager actively participates in project steering committee and executive meetings by providing presentations and responding to questions and requests for expert input. The focus is to ensure executive-level awareness of the project’s most significant issues and risks, as well as associated recommendations from an independent, expert source. The team also provides guidance and support to state employees leveraging standards put forth by PCG’s IV&V Center of Excellence, in addition to more than 20 years of PeopleSoft experience.

How did the FI$Cal project get started and where is it headed?

The FI$Cal project began as a business transformation project in 2005 to integrate, improve, and re-engineer the state’s financial management processes. The State Controller, the State Treasurer, and the Directors of the Departments of Finance and General Services signed a memorandum of understanding in 2007 to formalize the project. The project team selected PeopleSoft FSCM as the product, and project development began in 2010. The project team then selected Accenture as the system integrator for the project in 2012. In January 2015, the State Department of Finance prepared the proposed Governor’s 2015-2016 Budget of $164.7 billion using FI$Cal. In 2016-17, California legislation established the Department of FI$Cal to provide the ongoing maintenance and operation function for the FI$Cal system and support services for users of the system.

As of October 2018, FI$Cal has onboarded most of the agencies, boards, and departments (currently 155 of California’s 164 total) in California. FI$Cal now manages transactions for about 60 percent of the nearly $500 billion budget in fiscal year 2018-2019, including federal and all other funds. The next piece of the project involves implementing treasury control functionality. The final stage of the project, scheduled for completion in July of 2019, will be providing additional functionality to bring on the State Controller’s Office control functions.